The Iranian Pistachio Industry is very popular in Iran. Pistachio is a small tree native to the Middle East and Central Asia and grows in countries such as Iran, Syria, Turkmenistan, and western Afghanistan. This tree produces a fruit that is edible and very tasty. Pistachio is a Persian word that has entered European languages ​​through Latin. The Iranian pistachio industry is a multi-billion dollar business whose market value is increasing as the popularity of this agricultural production increases. Iran and the United States have a monopoly on world pistachio trade, accounting for 70 to 80 percent of world production over the past decade. In this report, we introduce the market, trade, and production, and export of pistachios in Iran and the United States as the two main producers of this product in the world. For information on the exact price of Pistachio, you can contact us via WhatsApp or our Contact us page. Also, you can visit our different packaging of saffron on our Buy saffron online page. Over the next few decades, even in countries where Iranian pistachios were well-received, restrictions on Iranian companies’ access to international financing prevented the country’s pistachio industry from growing in international markets. During this time, the US pistachio market expanded and pistachio cultivation expanded, especially in California, but in 2014, hot, dry weather on the west coast of the United States reduced pistachio yields by about half. The industry’s profits for the United States also fell sharply in 2015. 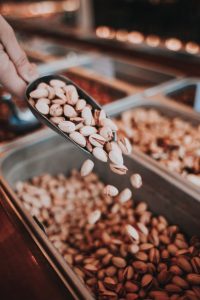 The average annual production of pistachios in Iran is about 200,000 tons and only 10% of this product is consumed domestically and the other 90% is exported. The annual consumption of pistachios for each Iranian family is about 2 kg. The production and export of Iranian pistachios generate about $ 1.4 billion to $ 1.7 billion annually for Iran. In Kerman province, Rafsanjan, Zarand, Sirjan, Anar, and Kashkuyeh counties are the main centers of pistachio production in Iran and 80% of pistachios are produced in Iran are obtained from these areas. This is confirmed by many major European distributors. Seeds and seedlings of the first pistachios planted in the United States are Iranian pistachios that have changed their taste due to changes in soil and climate, But Turkish pistachio is of another variety. Via the links below, you can read more about Iranian saffron.

Where Is Qaen City? Everything You Must Know 2021

We are a supplier of Iranian saffron and we supply saffron from the best fields of saffron in Iran. It should be mentioned that nearly 90 percent of saffron of the world is produced in Iran. We have also an agency in Lyon, France and you can also buy our saffron in Europe.

Apart from saffron, we also supply other products of Iran including pistachio, rosebuds, Mazafati Date, and barberry. If you want to buy any type of product from Iran, we can supply you. You may contact us via the Contact us page or WhatsApp. Also, you may see our different saffron packagings on our Buy saffron online page. When you want to buy saffron in bulk, you should be sure about the quality of the saffron that you are buying. Our saffron has got a European certificate from SAI CHIMIE lab which is one of the most famous labs in Europe.