Qaen city is located in the land of red saffron gold in the north of South Khorasan. This city is limited to Khaf and Gonabad cities of Khorasan Razavi from the north, and Sarayan city from the west, and to Birjand city from the south, and the east, it has a border of approximately 130 km with Afghanistan.

For information on the exact price of saffron, you can check the Iranian saffron price Page or you can contact us via WhatsApp or our Contact us page. Also, you can visit our different packaging of saffron on our Buy saffron online page.

The center of this city is Qaen city. The city of Qaen is 180 km from the Asia-Mashhad highway to Zahedan to the Afghan border and is 1440 m above sea level. It is 105 km away from Birjand and Gonabad, 372 km south of Mashhad, and 1300 km away from Tehran. 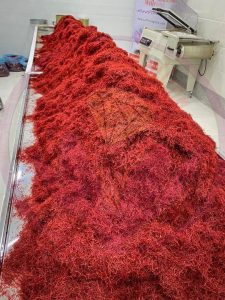 According to archaeological evidence and findings, the history of human settlement in Khonik Cave located 18 km south of Qaen dates back to 12 to 20 thousand years BC. Regarding this city, it can be said that Qaen is one of the ancient and historical cities of South Khorasan province, which according to historical texts dates back to pre-Islamic times. This city was important in the Sassanid period.

Qaen was the largest city of Ghohestan in the Islamic period and has always been important because it was located on the important trade routes of Sistan and Kerman and the shores of the Oman Sea. The commercial and economic importance of Qaen was such that in the fourth century AH, it was called (Oman Gate and Kerman Dock and Khorasan Warehouse). In the Islamic period, this city had a fort with different gates and a moat surrounded it, which still has a small part of the remains of this moat. Nasser Khosrow Ghobadiani visited this city in the middle of the fifth century AH and described it as follows: I have not seen Khorasan bigger than that and that arch is not suitable for that mosque and the mansion of the whole city is in a dome …). At the end of the fifth century AH, this city, and other areas of Ghohestan were the scenes of clashes between the Ismaili martyrs and the forces of the Seljuk government. In the middle of the seventh century AH, Holakukhan destroyed the castles of Alamut and Ghohestan, and in this enclave, many cities and settlements were destroyed and many were killed. On this date, peace was lost from Qaen because Hamdullah Mostofi in 720 AH mentioned Qaen and his people as follows: Archaeological excavations in recent years, which began with the excavation of the hill of Prince Hussein Qaen, led to the discovery of the remains of the Qaen Grand Mosque, which indicates the prosperity and prestige of the city in the Seljuk period.

As biographers and historians have quoted, the Qaen region with a history of thirty thousand years is one of the first origins of the Khorasan civilization.

Fakhr al-Islam attributes the birth of Cain to the time of Cain, the son of Adam, and in the culture of Dehkhoda, the first building of the city of Cain named Sam Ibn Nariman in the revival of the kings is attributed to Ki Lohrasb, the father of Goshtasb. They are sitting on the stone of this city. According to Sykes’ travelogue, written in 328 BC, 13,000 defenders of the city of Qaen came against Alexander the Great’s army, and Dr. Blue Goldsmith believes that the castle of Mount Qaen was in the hands of the Achaemenids. Qaen in the era of Sassanid rulers is also one of the important centers of power and one of the few strategic cities of Iran. Hijri has named the three gates of the city as Darkun, Draklauj, and Darzaqan.

Marco Polo and Nizi considered Ghaen’s weather to be extremely moderate and Yaqut Hamavi and Abda … Mohammad Ibn Ahmad Moghaddasi introduced it as the port of Khorasan and the treasury of Kerman. He camped, but by the grace and wisdom of the ruler of the city, he passed by it without war or bloodshed. In the Safavid era, in 1002 AH, Shah Abbas Safavid visited Qaen, and years later, during the Zandi dynasty, when Lotfali Khan Zand fled Kerman and came to Qaen, he was received there. On his return, the Qaenians gave him several cavalries to fight with Agha Mohammad Khan Qajar.

Dr. Joseph English considered Ghaen to be from the populated areas of Khorasan and the camp of brave men who had lived through swordsmanship and archery. Barberry is native to temperate and subtropical regions of Europe, Asia, Africa, North America, and South America. Iran is the largest producer of barberry in the world, among which Khorasan province and Ghaenat city, with nearly 97% of the cultivated lands of this product, produce 95% of the world’s barberry.

It is also worth mentioning that all the saffron of our company is harvested from this city.

Saffron is sold in 5 types in Ghaenat, each of these types has different characteristics and prices. For example, Negin saffron has the highest quality among the types of saffron and also the highest price. On the other hand, Konj saffron has the lowest price. If you are not familiar with the types of saffron, we suggest you read the rest of the article. “Dasteh” or “Dokhtar-Pich” is the main strand of Iranian saffron. When the farmer picks the strands of the saffron from the petals, he dries them and puts them together. The top part of these strands is red and the bottom part is orange.

This saffron has an overall color of 230 to 270 units. It is worth mentioning the production of this type of saffron is a bit difficult and time-consuming, yet the stigmas are long and thick which is alluring to the customers.

5. Types of saffron-“Konj” or White Saffron

As you studied earlier, saffron has two parts: Sargol (stigma containing three branches) and root (cream). The main part is red and is famous for Sargol (which means the tip of the flower in Persian). The white part attached to the end of the Sargol is called the saffron root or white saffron.

The color of these strands is light yellowish-white. Saffron root is also famous for Konj saffron. Although the color of this part of saffron is very low, there are also saffron compounds in this part. That is why some people use this type of saffron in the treatment of some diseases. White saffron has a good flavor but is much less expensive than other saffron products because of its low color.

Many famous scientists such as Zakaria Razi, Al-Biruni, and Ibn Sina used saffron to cure diseases. As was mentioned earlier, saffron root does not have the color of Sargol, yet it includes all the properties of saffron that have led to significant results in new research on saffron, including the treatment of jaundice, sexual and liver enhancement, learning disorders, etc.

To buy saffron in bulk, you may visit our Buy Iranian saffron page. We also have another branch in Lyon, France, which makes it very easy for you to order in Europe. For information on the exact price of saffron, you can contact us through the Contact us page or WhatsApp.

When you want to buy saffron in bulk, you should be sure about the quality of the saffron that you are buying. Our saffron has got a European certificate from SAI CHIMIE lab which is one of the most famous labs in Europe. Also, our saffron is packaged in different and luxurious packages. You can see our different packing below.