Although Iran produces more than 90% of the world’s saffron, according to a report published in December 2009, one of the methods of cheaters for this product is to mix fake saffron with the original saffron. Then they package and sell it.
Since the quality of saffron is different and most people do not know this, it is better to first get acquainted with the basic methods of distinguishing original saffron from fake saffron. The methods of distinguishing different types of saffron are very simple.

One of the easiest ways to identify a fake product is to pay attention to the standards on the product packaging.

Each country which produces saffron has its own quality standard for saffron. This standard is dedicated to different categories of saffron; To check aroma, taste and color, all types of saffron are evaluated with the same standards. This standard also offers suggestions for things like how to pack saffron. 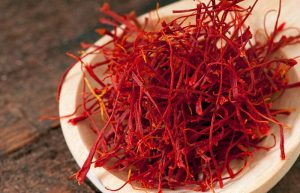 What is imitation saffron?

Among the common fraud ways in saffron, the following can be mentioned:

Dyeing saffron cream is often done with dye extracted from stigmas or other natural or artificial colors. Then it is mixed with saffron.
Re-dyeing the saffron that has already been used and using stigmas from the flowers of other saffron species, which are usually shorter and free of compounds. Weighing saffron by storing it in moist areas or even spraying small particles of water and soaking it in oil, honey, glycerin or solutions of potassium or ammonium nitrate, sugar, sodium sulfate.
There is more fraud in the trade of powdered saffron. Because fraudsters add red soil to ground saffron to gain weight.
The most important fraud that takes place is the use of safflower, which is very similar to saffron.

Methods of fermentation of saffron flowers

Brewing the saffron by boiling water

1. Put the saffron flower stigmas in the mortar and pestle.

2. Beat the saffron until completely crushed

3. When it is completely powdered, pour boiling water over it.

4. Cover the mortar for 30 minutes

The second method is brew saffron by ice.

Brewing the saffron by ice

The second and of course, non-conventional method of brewing the saffron is using ice.

For this method, it is best to put the saffron in a glass container and place some small ice cubes. Then allow the ice to melt at ambient temperature so that the saffron gives its extract and coloring. Using this method the saffron is said to give more color compared to the first method. The original scientific diagnosis of saffron

There are many other simple but proven methods to test the quality of saffron without expensive tests. These tests and methods for detecting original saffron are classified into several groups:
1- Visual diagnosis (seeing saffron)
2- Detection by smell
3- Recognition through taste

But how to distinguish original saffron from fake saffron by knowing these methods?

1. Diagnosis by looking at saffron:

– Negin: This type of large saffron is without cream and without breakage and softness, which is stronger than Sargol in terms of appearance and color.

– Sargol saffron: It is in the form of pure saffron without cream (without yellowness) which has three separate branches.

– Dasteh saffron: Stigma with cream 4-5 cm. Strings are categorized into one-way and two-way.

Another important point in distinguishing original saffron from fake is that the color of saffron should also be considered carefully; Because saffron is not very shiny. Saffron contains a compound called picrocrocin, which is responsible for the taste of saffron and makes it taste bitter. Pure saffron has a bitter and astringent taste and is never sweet. If it tasted sweet, it would be probably honey to increase its weight. To test the taste of saffron, all you have to do is ask the seller to give you 3 or 4 strands of saffron that you are going to buy and put it on your tongue and taste it for a few seconds; then put the strands on a napkin. Pour it on a clean paper and dry them. Even if the taste was bitter but the texture of the paper turned red, saffron is not original.
Also note that when saffron is placed between paper or newspaper and pressed, no grease stains will remain. Keep in mind that saffron originally smells sweet but its taste is not sweet at all.